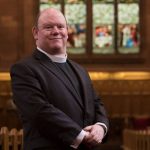 Dr Browning’s first charge was in Fife, where he was ordained to the ministry in Cupar Old and St Michael of Tarvit Parish Church in 1987.

Born in Edinburgh in 1962, Dr Browning was educated at North Berwick High School before going to Corpus Christi College, Oxford in 1980 to read History. He graduated with an M.A. Honours degree. In 1983, having been accepted as a candidate for the Ministry, he went to St. Mary’s College, St. Andrews, where he read Divinity and graduated with B.D. Honours. He continues to have an interest in ecclesiastical history.

In 1997 he graduated with the degree of Doctor of Ministry at Princeton Theological Seminary, where his doctorate involved the study of leadership.

Dr Browning is currently serving as Moderator of Edinburgh Presbytery, 2021-2022, and will become the Business Convener of the newly united Edinburgh and West Lothian Presbytery in 2022.

In recent years he has been a regular contributor to BBC Radio Two and its ‘Pause for Thought’ programme, and soon will contribute to Radio Scotland’s ‘New Every Morning’, and he has also appeared on national television and radio programmes. He has been appointed a Chevalier d’Honneur de la Commanderie du Clos Montmartre.

Dr Browning was the Moderator of the 2017 General Assembly of the Church of Scotland.

We gather for worship on Sundays at 9.30am (September to June) and 10.30am (throughout the year)

Click here for the live-link to services and recorded services, Orders of Service and Intimations